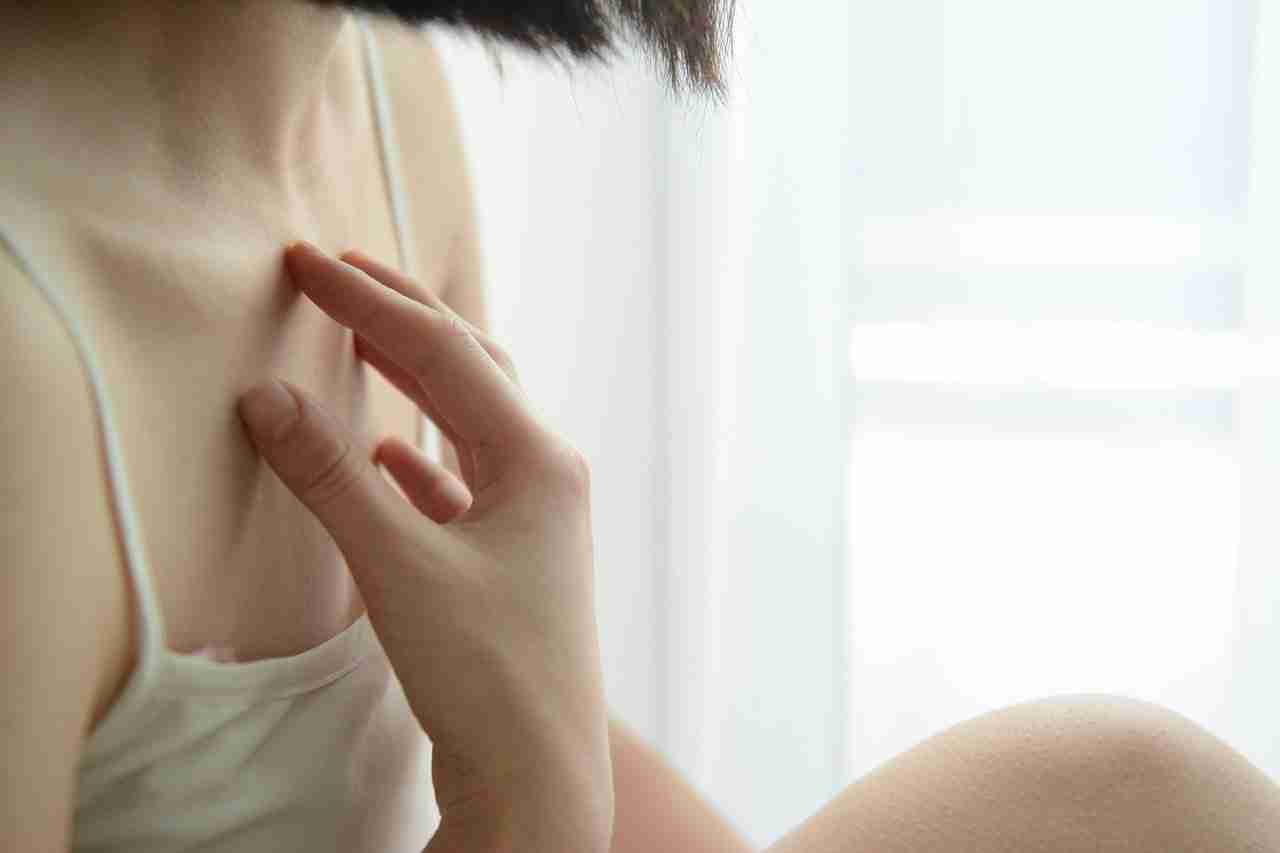 As lavish as its name sounds, astaxanthin provides equally superb health-giving benefits to the skin, due to its unique chemical properties.

These unique compounds through researches, studies, and experiments made their way to different skin, beauty, and medical applications for a plethora of skin conditions including skin aging, depigmentation, skin dryness, dark spots, skin injury, dermal pigmentation and other treatments.

Astaxanthin, or 3,30-dihydroxy-b,b-carotene-4,40-dione, belongs to the group of carotenoids, alongside β-carotene, zeaxanthin, and lutein.

What makes it stand out among them is the fact that it is more bioactive than each of the mentioned compounds. Furthermore, unlike other carotenoids, it is not converted into vitamin A at any point.

While in nature it is the most abundant in Alga Haematococcus Pluvialis, 95% of the substance available on the market is produced synthetically, using appropriate chemical processes and reactions.

Does astaxanthin help to improve our skin?

Short answer is YES, it does help not just to improve skin, but also to treat several skin conditions.

Having polar end groups in its molecule, it is able to effectively scavenge free radicals, which knowingly invoke oxidative stress in skin cells.

Because of its structure, it is able to insert itself in the layers of skin cell membranes, maintaining their stability and integrity to provide best possible result.

In our next section, we have covered most of the skin benefits that astaxanthin has to offer.

Dermatologically speaking, the skin aging process can be divided into two categories:

While the first one is inevitable and depends on the natural, programmed processes in our body, the second one is influenced by external factors or, in other words, environmental skin irritants.

At the same time, both are contingent on the formation of the so-called reactive oxygen species (ROS) which are known to bring about enormous oxidative stress in the skin.

Consequently, the latter causes DNA damage promotes the production of enzymes that break down elastin and collagen (proteins responsible for skin firmness), reduces the synthesis of antioxidants as well as induces inflammation.

On another note, chronic inflammation only aggravates the signs of skin aging and can even lead to acquiring one of the skin cancers.

Astaxanthin exerts significant antioxidant activities not only by directly scavenging free radicals on its own, but it also activates additional antioxidant pathways in the cell to enforce the defense.

Accordingly, it excellently minimizes the loss of skin firmness related to aging and reduces the appearance of fine lines and wrinkles.

UV radiation is something that everyone is exposed to every day. It is dangerous to the skin mainly because of the generated DNA damage which causes DNA mutations, indirectly leading to the destabilization of the skin structure.

In a large part, it does so via inducing oxidative stress within the skin cells.

Consequently, a series of protective DNA repair mechanisms are provoked to maintain the good state of the cell.

Astaxanthin is proven to stimulate the DNA repair mechanisms, including the production of antioxidant enzymes, therefore notably mitigating the detrimental effects that UV radiation exerts on the skin.

Some skin types are more sensitive than others, having a tendency for infections and irritation.

Astaxanthin is shown to strengthen the proper immune response in the skin, which makes it much more resilient.

It stimulates the activity of both T and B immune cells, promoting the production of antibodies and interferon-gamma – a natural antiviral substance.

Astaxanthin has been proven effective against hyperpigmentation of various origins, especially in the inflammation-induced ones.

It significantly lowers the release of interleukins and tumor necrosis factor-alpha which stimulate melanogenesis, or skin pigment production, partly as a defensive response.

Furthermore, other mechanisms responsible for astaxanthin being such an excellent anti-hyperpigmentation agent are still under examination.

Besides its antioxidant properties, it is thought that the substance regulates the intracellular signaling pathways leading to increased melanin production.

Apart from being a potent antioxidant, astaxanthin is also able to directly alleviate skin inflammation, including its chronic type.

Because of such features, it has been successfully implemented in the treatment of typical inflammatory skin conditions, for instance, atopic dermatitis and psoriasis.

Moreover, besides diminishing the formation of pro-inflammatory markers, it also blocks various pathways contributing to the ignition of inflammation, including the NF-κB pathway.

All kinds of skin cancer: basal cell carcinoma, squamous cell carcinoma, and malignant melanoma are a result of one or both of the subsequent mechanisms: chronic inflammation and chronic oxidative stress.

Since the substance is known to actively mitigate two of the mentioned pathways, it has also been proven successful in skin cancer prevention.

How long does it take to see the results of astaxanthin?

The first noticeable benefits can be seen after approximately 4 weeks, that is the duration of the skin turnover cycle.

However, the results of astaxanthin are best observed in the course of months as it causes a gradual improvement in your skin health.

What are the side effects of astaxanthin?

Until this day, not enough research has been carried out to definitively confirm some of the suspected deleterious side effects of astaxanthin in food supplements – in food, it is considered totally safe.

When it comes to the rumors, astaxanthin is thought to cause liver damage or drastic hormonal shifts in the body.

In contrast, the very opposite has been affirmed, astaxanthin can contribute to liver disease prevention as well as is not shown to anyhow significantly influence the hormonal system.

One study has demonstrated that the substance increases the production of progesterone in isolated bovine cells, nonetheless, the studies with bigger masses are still in progress.

For sure, it is unquestionably best not to supplement astaxanthin in two situations: during pregnancy and when breastfeeding, as it is not extensively studied how the compound might affects the baby.

Can astaxanthin be applied topically?

Yes, astaxanthin can be applied topically, nevertheless, some adjustments have to be implemented in the cosmetic’s formula.

Owing to the substance’s poor water solubility, it is very difficult to effectively administer astaxanthin topically in the form of a skincare product.

Still, science has found ways to omit this adversity.

If a product contains a suitable lipid phase that is able to disperse the water-loving astaxanthin, it can be successfully applied to the skin, efficiently providing its regular benefits.

However, to maximize its long-term wholesome advantages, especially if your skin pigmentation is too deep, it is better to consume it either with food or in the form of supplements for faster result.

Astaxanthin is primarily produced by microalgae or phytoplankton, therefore it is visibly abundant in the marine world.

As mentioned previously, its richest source is the Alga Haematococcus Pluvialis, nonetheless, it can be also synthesized by plants and bacteria.

From there, it is consumed by bigger water organisms including fish and other animals that are considered seafood. In this manner, it eventually lands on our plates.

Here is the list of the foods to eat to easily incorporate astaxanthin into your daily diet:

Astaxanthin shines on the ingredient lists of various skincare and beauty products. The list is rather long! I promise to cover in detail in forthcoming post.

For now, just to name a few, here you can find some information on astaxanthin cosmetics and supplements to invest and see your skin glow, and recover from issues:

This face serum is not only reasonable in its price but also brings extreme relief to dry, sensitive skin, especially if it quickly acquires the signs of aging.

Besides having astaxanthin as its main active ingredient, it is packed with other powerful antioxidants like retinol, vitamins C and E, green tea extract, grape seed oil, raspberry seed oil as well as blueberry seed oil.

DHC Astaxanthin Collagen All-In-One Gel is a true gem of its kind.

Apart from providing the excellent properties of astaxanthin, it perfectly strengthens the natural skincare barrier with skin mantle-compatible ingredients like squalene, hydrolyzed collagen, and sodium hyaluronate.

Not only do they visibly increase skin moisture and hydration levels, but also bring a positive change in skin firmness and elasticity.

In local market, you should find various producers manufacturing effective astaxanthin supplements. The substance’s dosage in the tablets varies from a few mg to 12 mg.

It can also be found as an addition to other antioxidants and vitamins, choose either pure astaxanthin or a mixture suitable for your own needs and desired effects.

When selecting your brand, it is important to check its transparency and safety.

For instance, Doctor’s best offers a 6 mg astaxanthin that is ideal to start the supplementation for limiting skin pigmentation, whereas there are other astaxanthin supplements available for other skin issues.

How Deep Is Your Skin Pigment | Dermal Pigmentation