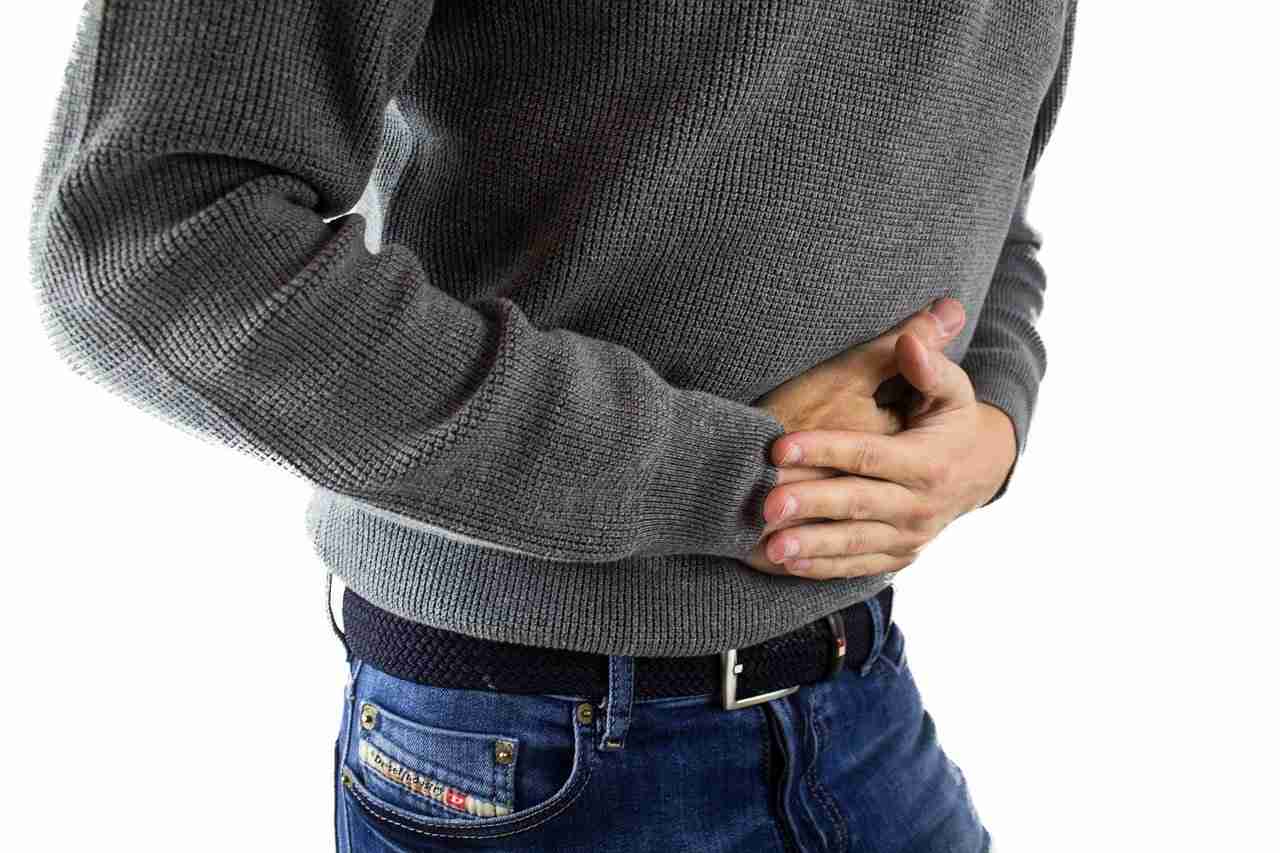 Professionally speaking, bloating can be defined as a sense of being distended, while the actual, visible distention does not have to occur.

The often interchangeably used term “abdominal distention” should be reserved for people with an apparent measurable increase in abdominal circumference.

In the medical world, bloating is diagnosed by means of the so-called Rome criteria, which e.g. require the symptoms to last for at least 3 days per month for at least 3 months.

Both Rome criteria and the feeling of symptoms remain the same for vegan and non-vegan people.

Why Does Vegan Diet Cause Excessive Bloating?

In a nutshell, bloating occurs where there is an excess of gases in the lower intestinal tract. While it can be affected by miscellaneous conditions, it is mostly produced by the colonic bacteria or the colonic microflora.

The gases are synthesized when the mentioned bacteria metabolize nutrients of a more complex structure like fructose and fiber.

Since such substances are predominantly abundant in plants and fungi – staples of a vegan diet – vegan people are more prone to frequent bloating.

What Are The Vegan Foods That Cause Bloating And Should Be Avoided?

Whilst beans are an excellent source of protein for vegans, they also contain so-called FODMAPs or short-chain carbohydrates which easily escape the proper digestion process, hence are massively metabolized by the gut microflora.

If having read about beans, you wanted to switch to lentils, you should know that lentils possess very similar nutritional characteristics as the above. Yes, they are rich in minerals and protein, yet they also teem with FODMAPs.

If you are very prone to bloating, limiting your mushroom intake may significantly reduce your symptoms. Mushrooms are built of some of the hardest to digest substances to humans, thus stimulate the production of gut gases.

Having a tendency for bloating after eating gluten-containing foods like wheat may be a manifestation of a gluten allergy or celiac disease. Some people do not digest gluten, hence it escapes the normal route of digestion, causing gassiness.

“Cruciferous vegetables” sounds fancy and complicated, yet they embrace such commonly known vegetables like cauliflower and broccoli. Surely are they immensely nutritious and delicious, yet still contain high levels of FODMAPs.

How Long Does Bloating Last When Going Vegan?

The vegan diet is more likely to cause bloating since it is notably richer in complex substances that are undigestible or much harder to digest by humans, hence are metabolized by the gut microbiota that releases gases as a by-product.

The topmost common gases found within the GI tract because of this process include nitrogen, oxygen, hydrogen, carbon dioxide as well as methane.

Accordingly, if before going vegan you were vegetarian and still ate lots of plants and mushrooms, changing your dietary habits will not affect you as much, if anyhow.

On the contrary, people who went vegan after following a meat-rich, plant-poor diet, can be much more prone to bloating.

Similarly, if you radically switch to a well-balanced vegan diet (meaning you will not be eating beans and lentils for every meal of the day), you may not notice any bloating symptoms at all.

Other factors that affect the severity of the manifestations are psychological stress, inflammatory bowel disease, food allergies, coeliac disease, or intake of certain medications that can cause various GI symptoms.

Studies do not indicate a certain period after which the bloating ceases in every individual, yet certainly, it occurs when one achieves balance in their new vegan diet. Then, the bloating has no right to appear.

How To Avoid Bloating While On The Vegan Diet?

CHECK FIBER IN THE DIET

Following the above-described rules, it all comes down to balance. When preparing vegan meals, do not fill them just with fiber-rich foods like vegetables.

Besides complex carbohydrates, which are more difficult to digest, add some protein and fats. At the same time, if you are still prone to bloating, avoid the foods with the highest fiber content.

The high temperature helps to break down the complex substances in various foods.

For example, when it comes to the “cruciferous vegetables” like cauliflower and broccoli, cook them properly in a water bath for around 20 minutes before serving.

Pro tip: it is the healthiest cooking method for these types of foods – it retains its nutritional value regarding vitamins and minerals, yet makes the sugars easier to digest.

BE SELECTIVE ABOUT FOOD COMBOS

Do not combine the foods which alone are likely to make you bloaty. For instance, when preparing dinner, do not mix lentils and pasta, and peas together.

As mentioned, check the fiber content and do not combo the bloating-giving properties.

Did you know that the digestive process starts already in your mouth? In the saliva, there are certain digestive enzymes that start digesting the food once it lands in the oral cavity.

The longer you chew, the longer the enzymes remain in contact with the food what results in a better digestion process, unless you are suffering of enzyme deficiency.

Moreover, when you chew you fragment your food what also makes it easier to digest later on.

If the substances do not remain in the intestines for too long, the less chance they will get to come in contact with the gas-producing bacteria.

Drink plenty of water to naturally stimulate your digestion and intestinal passage.

Instead of gulping down the whole bottle of water in one go, drink slowly. It will help to stimulate the intestinal passage evenly and long-term.

Remember that water passes through the gut much more quickly, leaving the digesting food behind – hence, additional sips are needed.

What Are The Vegan Foods That Reduce Bloating?

Stock up on vegan yogurt or sauerkraut – they all contain healthy, beneficial bacteria.

If you let them settle down in your gut, less place will be left for the pathogenic bacteria which are prone to producing more toxins and gases.

Ginger is extremely anti-inflammatory, which immensely comes in handy especially if you suffer from a bowel inflammatory disease.

By decreasing inflammation, it reduces general edema in the gut. Moreover, it naturally possesses a digestive enzyme called zingibain, which helps break down protein.

Since in our cells, sodium tends to be replaced with potassium and bananas are rich in the latter, these tasty fruits will help you get rid of the gassiness.

Cucumbers naturally contain enormous amounts of water. As mentioned earlier, it can only do good to your digestive process and intestinal passage.

Furthermore, these vegetables teem with vitamins and microelements.

Tomatoes possess extraordinarily high levels of lycopene – an antioxidant to which they owe their potent anti-inflammatory properties.

Lifestyle Changes To Manage Bloating As You Go Vegan

Probiotics are defined as living microorganisms that are beneficial to the human host when administered in the appropriate amounts based on thoroughly performed clinical trials.

When we supplement them, they settle down in our gut, naturally strengthening our immune barrier and reducing inflammation.

Besides, they leave less place for the pathogenic bacteria which can reside in the gut and, for instance, cause a disease.

The latter is especially important when having undergone a course of antibiotics or after an episode of diarrhea when the intestines are depleted of the advantageous bacterial species.

Try to move more every day by implementing small alterations like taking the stairs or riding a bike instead of traveling by car, as well as start practicing a sport.

Similarly, avoid the sitting position for longer periods of time without stretching and moving breaks – it only increases gas and fluid retention.

Science cannot stress enough how important it is to stay adequately hydrated throughout the day, let alone if you are suffering from frequent bloating.

Not only will it improve the intestinal passage and stimulate metabolism, but it will also make you feel and look better. Welcome a healthier skin and say goodbye to headaches!

Mixes of specially selected digestive enzymes have been long used as adjunctive therapy in patients suffering from gastrointestinal symptoms.

From a logical point of view, they facilitate digestion by increasing the concentration of digestive enzyme levels.

Before starting such therapy, consult with your doctor.

There are certain antibiotics that are knowingly proven to notably reduce bloating. Among them, rifamixin is to be found.

Its beneficial properties, in this case, have been confirmed by the studies in which gas levels in the gut were compared before and after the administration of rifamixin.

Samely, it is wise to consult commencing on antibiotic treatment with a health professional.

It is not uncommon to prescribe tricyclic antidepressants for abdominal pain and similar complaints. Their effectiveness has been confirmed by multiple research.

At the same time, this group of medicine can cause other significant side effects, hence before taking them a consultation with a doctor is imperative.

Laxatives stimulate the passage of water to the gut, promoting intestinal passage and preventing constipation.

This reduces the time when the food stays in contact with the gas-producing bacteria, hence averts bloatedness.

What If Bloating Become A Bit More Serious?

When the symptoms do not subside or gain in severity, you should go to your doctor as soon as possible to rule out any disease.

As much as there exist other therapy options for chronic bloating, like antispasmodics or prokinetic medicine, they still are not to be used during emergencies and may not be more effective than the above-mentioned choices.

12 Nutritious And Healthy Snacks For Elderly Member In Family