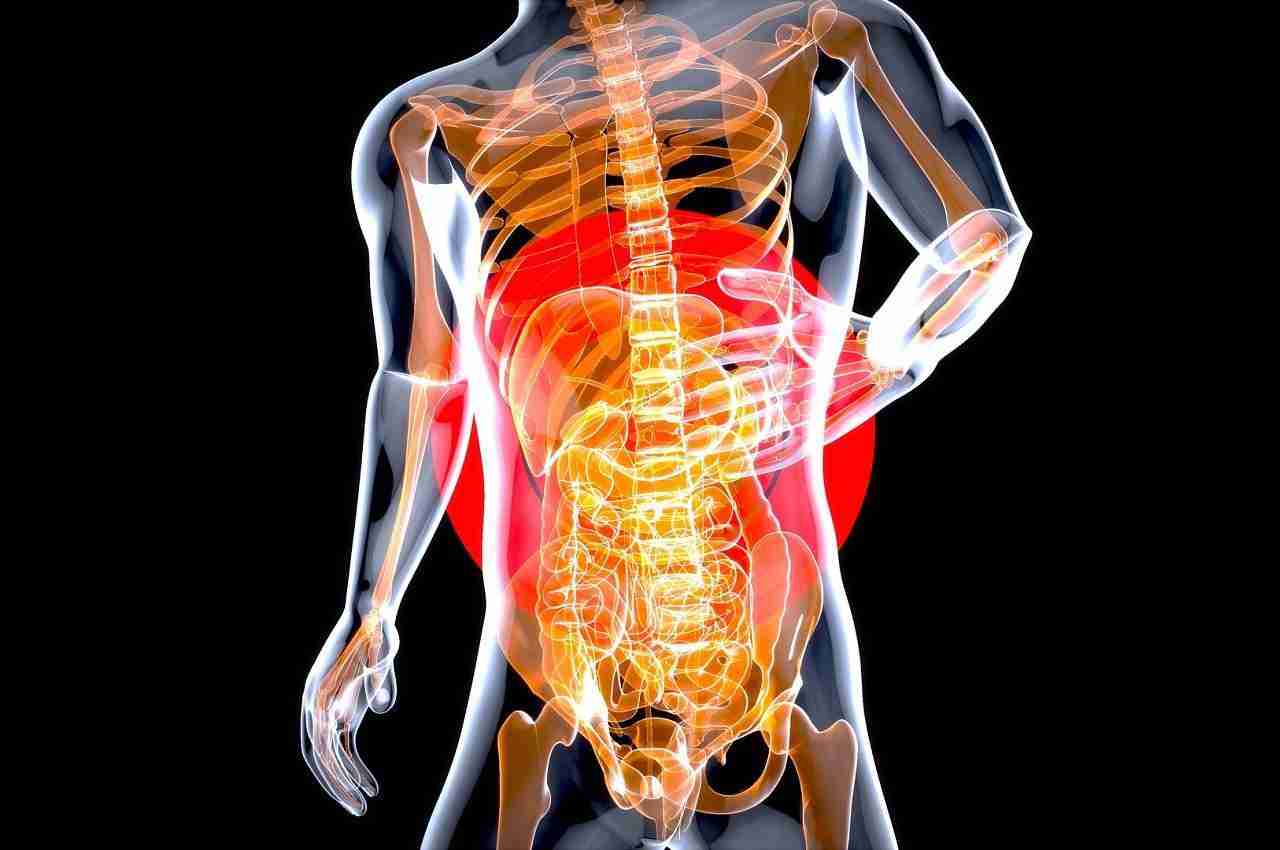 One of the ways in which this condition can manifest is a gallbladder attack or professionally called biliary colic – a characteristic pain in the right upper stomach (the right hypochondrium). This happens due to an obstruction of the cystic duct or the common bile duct of the biliary tree.

How to recognize it correctly and what to do if it takes place? We covered it all, keep reading…

What is a Gallbladder Attack?

Acute gallbladder attack or acute biliary colic happens when there is an obstruction of the cystic duct or the common bile duct, usually by a gallstone, and the muscles in the wall of the gallbladder reflexively contract causing pain [1].

Under normal conditions, the cystic duct and the common bile duct comprise the so-called biliary tree through which the bile is transported from the gallbladder right into the duodenum and can be later used to emulsify and absorb fats from the food.

For this reason, fatty meals are one of the most common gallbladder attack triggers.

This scenario is called chronic cholecystitis and in this case gallbladder attacks are periodical and recurrent.

In this instance, the typical pain in the right upper stomach is accompanied by fever, chills, and high levels of inflammatory markers in the blood tests.

Gallbladder attacks are definitely more frequent in females as the estrogens greatly contribute to the formation of gallstones [1].

Simultaneously, they are also visibly more common in obese patients with elevated cholesterol levels as a huge part of symptomatic gallstones are made of cholesterol [1].

What Causes a Gallbladder Attack?

As mentioned earlier, a gallbladder attack or biliary colic is directly caused by the constriction of the muscles of the wall of the gallbladder that most commonly happens because of the obstruction of the biliary tree by a gallstone.

This condition can often transform into acute cholecystitis with fever and chills.

Sometimes, the gallstones that do not yet obstruct the biliary tree move freely inside the gallbladder and irritate its mucosa what also triggers the gallbladder walls to contract and cause typical pain. In this case, it is called chronic cholecystitis.

The most typical symptom of a gallbladder attack is a characteristic pain that is more thoroughly described later. It is caused by the constriction of the gallbladder’s walls.

The acute and very strong pain that is present during a gallbladder attack activates the body’s receptors that are responsible for vomiting and feeling nauseous [2].

These, on the other hand, make one feel weak and can lead to dehydration.

The strong pain during a gallbladder attack is the most common cause of the reflexive paralytic intestinal obstruction or the immediate stoppage of the peristalsis.

The typical manifestations of this condition are indigestion, gas retention and heartburn as neither food nor gases can freely pass through the intestines.

Pain During Palpation of The Right Upper Stomach

The pain felt during a gallbladder attack is not only felt from within but is also stronger upon palpation of the right upper stomach.

During a gallbladder attack, especially with acute cholecystitis, the so-called Murphy’s sign is positive [3].

It means that there is stronger pain in the right upper stomach upon inspiration and the concurrent pressure put on the gallbladder by one’s hand.

It usually stops one from continuing the inspiration.

Typically, fever and chills are not present during a gallbladder attack.

Nonetheless, if a gallbladder attack has already transformed into acute cholecystitis, fever and chills accompany the characteristic pain.

To relieve a gallbladder attack at home, pharmacological medicines should not be neglected.

Combination of a painkiller that is available over-the-counter like acetaminophen or any nonsteroidal anti-inflammatory drug and spasmolytic will effectively alleviate the symptoms [2,6].

However, the above mentioned medication not recommendation. It is strongly recommended that you consult your doctor prior taking any medicine, or move into any medical treatment.

If a patient is admitted to a hospital with a typical gallbladder attack or cystic colic, they will be prescribed painkillers and spasmolytics.

In this scenario though, the drugs can be appropriately stronger than those available over-the-counter and be administered intravenously.

At the same time, at a hospital it is possible to effectively hydrate a patient that had lost a lot of water via vomiting.

After the pharmaceutical therapy, the patient awaits a planned cholecystectomy that is typically done laparoscopically and is the golden standard of treatment in gallbladder attack [1,2].

Concurrently, if any concrements had been found in the distal biliary tree during an ultrasound examination, the endoscopic retrograde cholangiopancreatography should be performed before the cholecystectomy.

Upon the admission to the hospital, every patient is closely examined with regard to the possibility of developing peritonitis, sepsis or other life-threatening complications.

If their condition is this serious, the surgery should be performed immediately.

1. When to go to the hospital for Gallbladder Attack?

Any gallbladder attack, especially if it is the first one, should be reported to a doctor.

Nonetheless, there exist certain circumstances when calling an ambulance for a gallbladder attack should happen quickly:

2. What to eat during Gallbladder Attack?

First and foremost, it is crucial to assess if eating will be effective as vomiting prevents the absorption of nutrients and water.

Water is the most easily lost during a gallbladder attack due to vomiting or excessive sweating, it is important to drink water to keep body hydrated.

When it comes to the food, a non-fatty, lightweight diet that is rich in fiber is the ideal choice in this scenario. It has been shown in numerous research that it reduces biliary colic.

3. Where is the Gallbladder Attack pain felt?

In around 60% of the patients, it radiates to the angle of the right scapula on the back or to the right shoulder [4]. This symptom is professionally called a positive Boas’ sign.

As mentioned earlier, the pain is stronger upon palpation or pressing the area with a hand.

4. How to stop Gallbladder Attack while it is happening?

There are multiple medicines that cause a gallbladder attack relief. Usually, both painkillers and spasmolytics are administered simultaneously [2,6].

When it comes to the first group of drugs, any nonsteroidal anti-inflammatory drugs (NSAIDs), acetaminophen or some opioids like pethidine, buprenorphine or pentazocine will stop the pain.

At the same time, it is crucial to note that morphine should not be administered under any circumstances during a gallbladder attack as it strengthens the contractions of the Oddi sphincter that would only exacerbate the obstruction of bile flow.

As for the spasmolytics, drotaverine, hyoscine or papaverine are great choices.

5. How long does Gallbladder Attack last?

A gallbladder attack that is not associated with acute cholecystitis typically lasts for about 30 minutes and does not generally last longer than 5 hours [2].

Most often, the pain rapidly increases in intensity and at one point, reaches a plateau. If it lasts longer than 5 hours, it is a sign that it has probably transformed into acute cholecystitis.

Just before I conclude, there are few interesting questions about gallbladder attack float around in the internet, I thought it would be good to cover them as well!

By definition, a typical gallbladder attack cannot occur if you do not have a gallbladder, nevertheless a very similar pain can take place in several cases.

They include: an infection after cholecystectomy, choledocholithiasis and other dysfunctions in the area. They should all be reported to a doctor.

2. Why do gallbladder attacks happen mostly at night?

Gallbladder attacks get worse at night because as one lays down when sleeping, they constrict the gallbladder what exacerbates the blockage of bile flow.

3. What are the difference between Pancreatitis and Gallbladder Attack?

In pancreatitis, a completely different organ, the pancreas, is affected. Moreover, the symptoms are different!

The pain is typically located in the epigastrium (the upper stomach) and radiates bilaterally to the back while there is no tenderness to palpation in the right upper stomach.

In the lab results the levels of amylase and lipase are extraordinarily high.

A gallbladder attack or biliary colic is one of the most common gastrointestinal conditions.

It presents itself with a typical pain in the right upper stomach that radiates to the angle of the right scapula and the right arm as well as other manifestations.

Painkillers and spasmolytics are effective remedies to stop the symptoms before performing cholecystectomy that constantly remains the first-choice treatment.

How Deep Breathing Benefits You In Stressed Life?

How To Know If Broken Bone Is Healing?

Can Sports Hernia Heal On Its Own? What Are The Treatments?